During Christmas by Candlelight, guests can see a variety of crafts and cooking demonstrations. Below, you will find an assortment of recipes and Christmas craft projects that you can do at home! 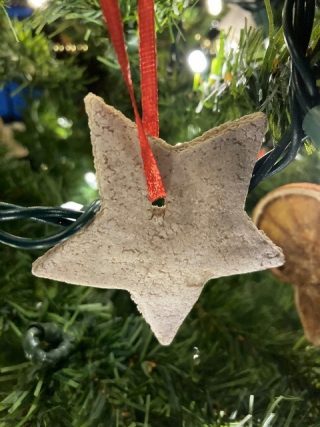 * These ornaments are not edible!

* Optional: After the ornament is cool, decorate with paint or glitter.  To preserve ornament for a long time, spray with polyurethane. 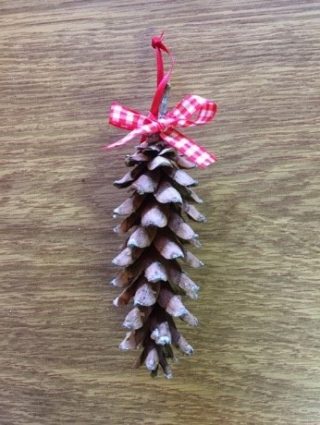 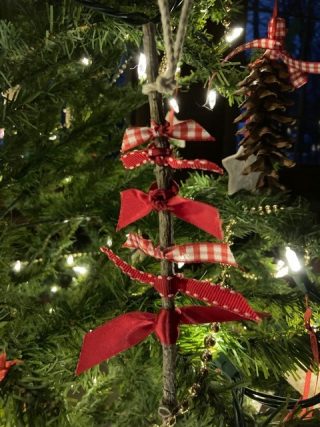 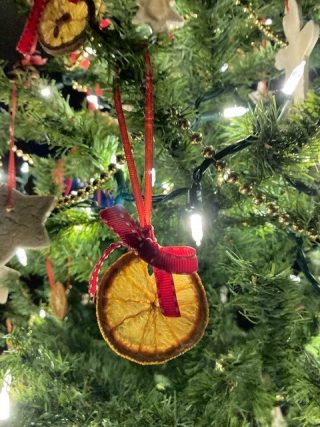 In the 19th century, oranges were a very special seasonal treat, coming from as far away as Seville and Valencia in Spain.  Often, the peel would be saved and dried for future baking while family members would share the sections of the orange.  On Christmas Eve, stockings were hung by the fire with the hope that they would be filled with delights such as small toys, books, sweets, or oranges.  The dried orange slice ornament is a modern decoration that celebrates how special it was to have or receive an orange in the winter.

To dry the fruit: 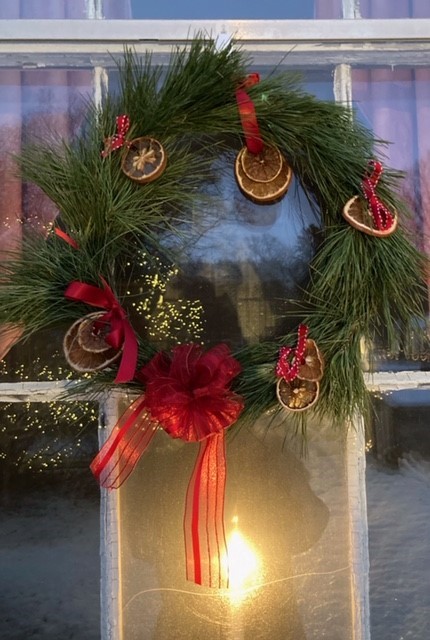 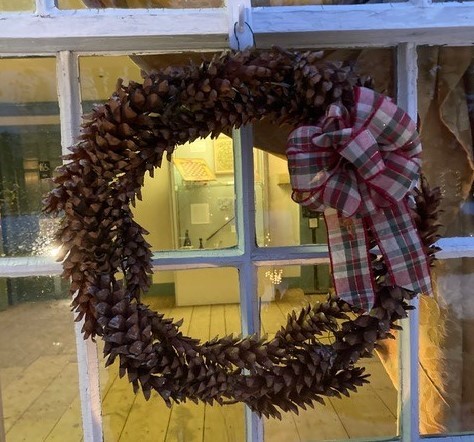 Any pine cone wreaths can last for many years if well cared for.  The cones should be washed to remove dirt and bugs.  They are then baked to melt the sap.

Directions for Making the Wreath:

To give the wreath a full, three-dimensional look, each row of pine cones is placed in a different direction.

Round 1: Knit all stitches

Round 3: Knit all stitches 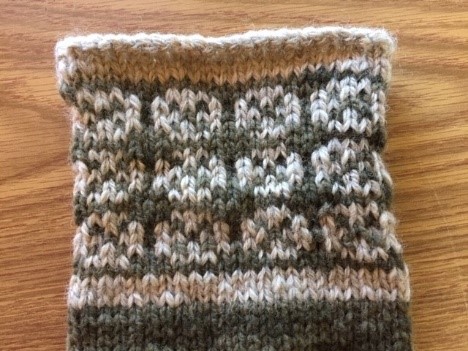 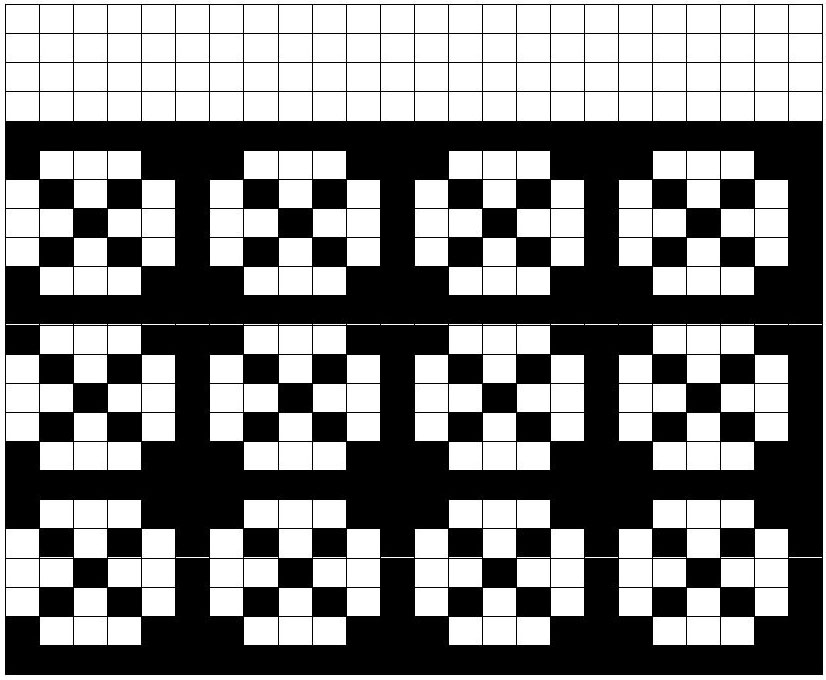 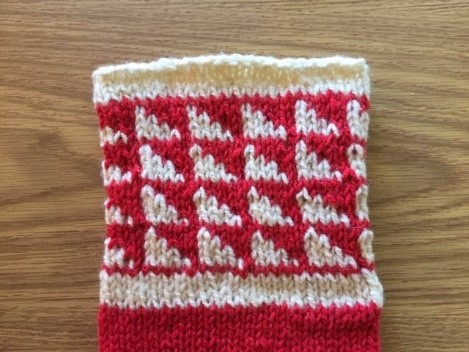 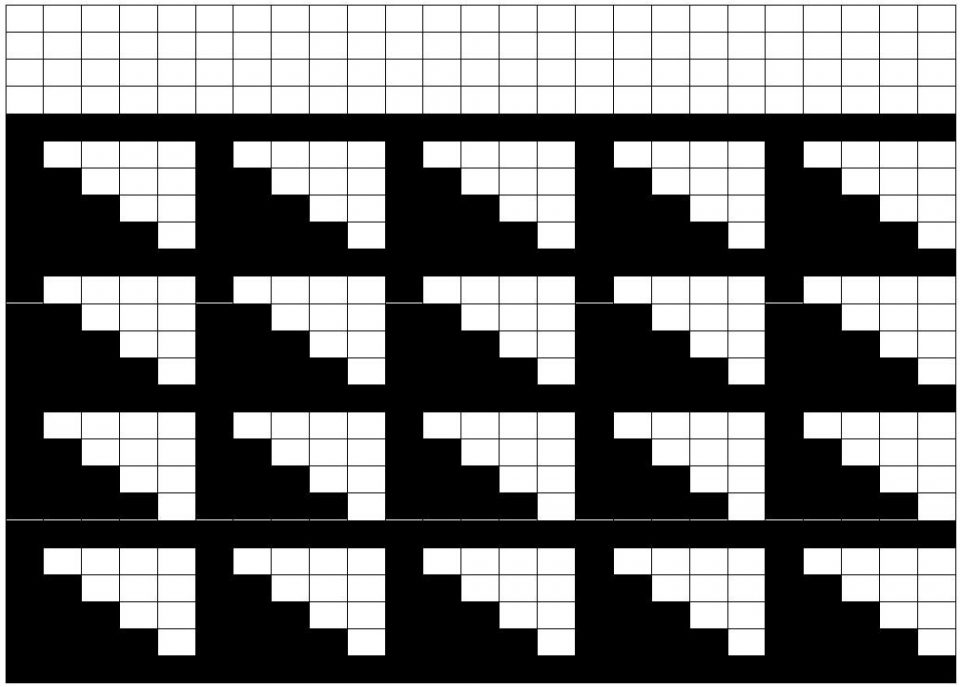 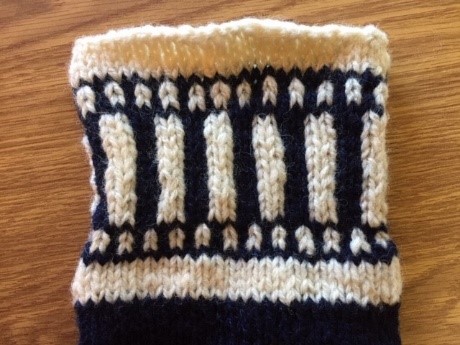 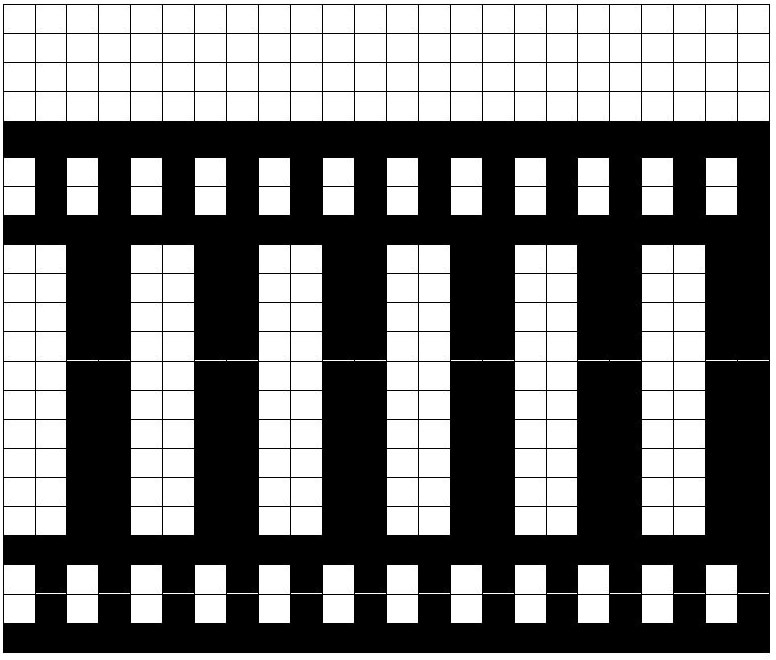 Nine Men’s Morris is a strategy board game for two players about 2,000 years old, dating at least to the Roman Empire, although some date it was far back as Egypt c. 1400 BCE. The game is also known in English as Nine-Man Morris, Mill, Mills, the Mill Game, Merels, Merrills, Merelles, Marelles, Morelles, and Ninepenny Marl. The name probably derives from the Latin word Merellus, meaning “gamepiece,” corrupted in English to “morris,” while Miles (English corruption “mills”) is Latin for “soldier,” since the game was widely played by Roman soldiers, and the goal is to line pieces up in rows. 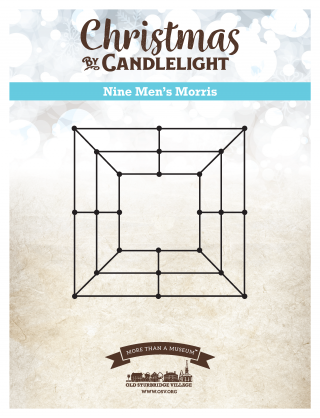 When the nine men on each side have been put on the board, you then begin to take turns moving any of your men from one dot to another, along the lines, to the nearest vacant dot. For each new row of three that you make, you take another opposing man off the board. When your opponent makes a new row of three, he will take one of your men off the board. You may not move a man in and out of the same row of three and claim it as a new row. To be a new row, at least one of the men in the row must be new, or you may move the same three men to a new line. You win the game when your opponent has less than three men left.

Adapted from The Sports and Pastimes of the People of England by Joseph Strutt, London, 1845. Old Sturbridge Village, 2021 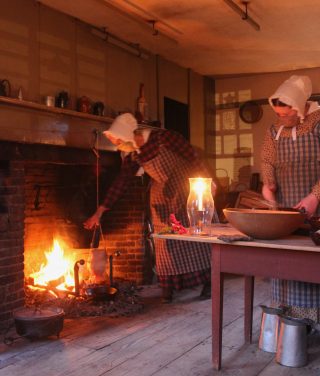 During Christmas by Candleight 2021, guests will see a variety of holiday dishes being prepared – both from the Village’s time period as well as one more modern take on traditional favorite. 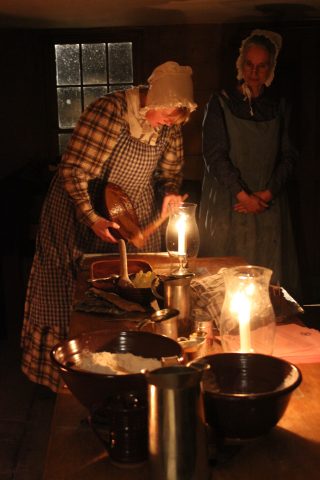 Hard and soft gingerbread has been baked in Europe and the United States for centuries. While the precise origins are murky, gingerbread was a relatively popular treat in medieval Europe.

“Six teacups of flour, three cups of molasses, three cups of cream, two of butter, one tablespoon of pearlash, and the same of ginger.  Bake in a quick oven about half an hour.” 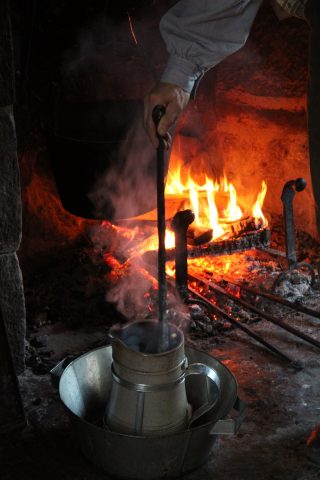 Cider was a very common drink in early 19th-century New England since apples were abundant in the region. This cider was hard cider, with an alcohol content of 4-8 percent. Common drinks like this could be made festive for special occasions by spicing and mulling.

The mulling iron that our costumed historians use to mull cider during Christmas by Candlelight is heated to approximately 1000 degrees Fahrenheit before placing it in the cider. The hot poker caramelizes the sugars in fresh cider and makes the drink sweeter while blending the spices without having their oils turn bitter. If using hard cider, the mulling iron will caramelize sugars without evaporating too much of the alcohol.

*If using hard cider, add a ½ cup of sugar to a gallon (or more to your taste) and stir until dissolved if you desire sweet cider.

The hot poker will caramelize the sugars in fresh cider and make the drink sweeter while blending the spices without having their oils turn bitter. If you use hard cider, the action of mulling with the iron will caramelize sugars without evaporating much of the alcohol content. You may mull hard or fresh cider with the addition of the spirits of your choice without compromising their strength. 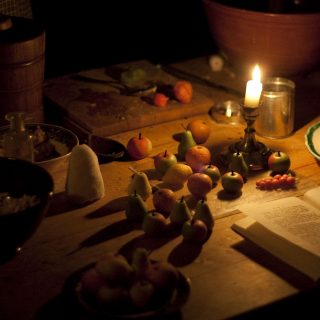 “Take two pounds of almonds, being blanched and dried in a sieve over the fire, beate them in a stone mortar, and when they bee small mixe them with two pounds of sugar being finely beaten, adding two or three spoonfuls of rose water, and that will keep your almonds from oiling.” 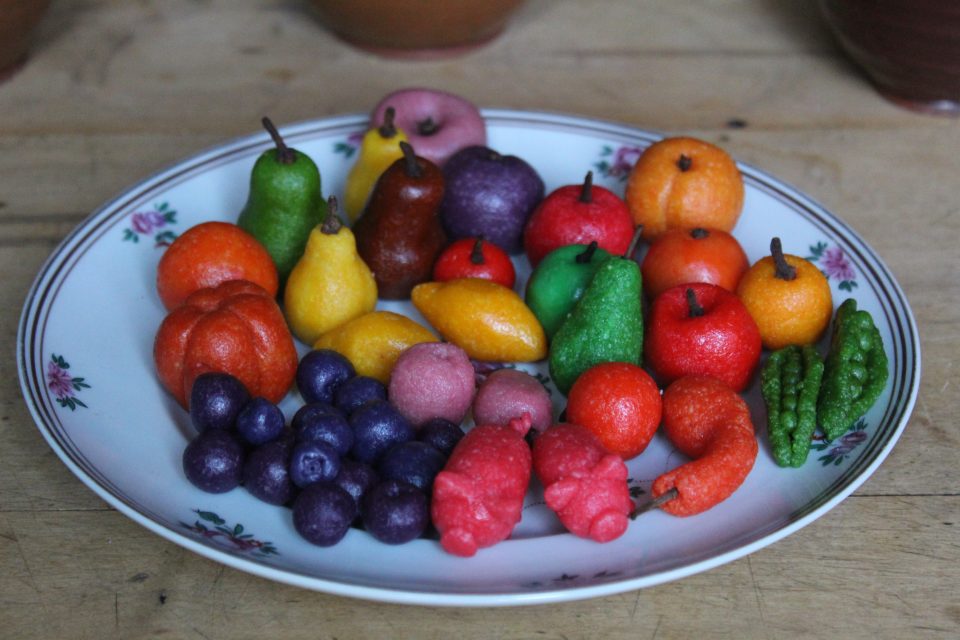 “Mix one pound currants, nutmeg, mace and cinnamon on qr. of an ounce each, 12 eggs, one quart milk, and fufficient quantity of raifins, 6 pound of flour, 3 pound of fugar, 2 pound of butter and I pint of yeaft.” 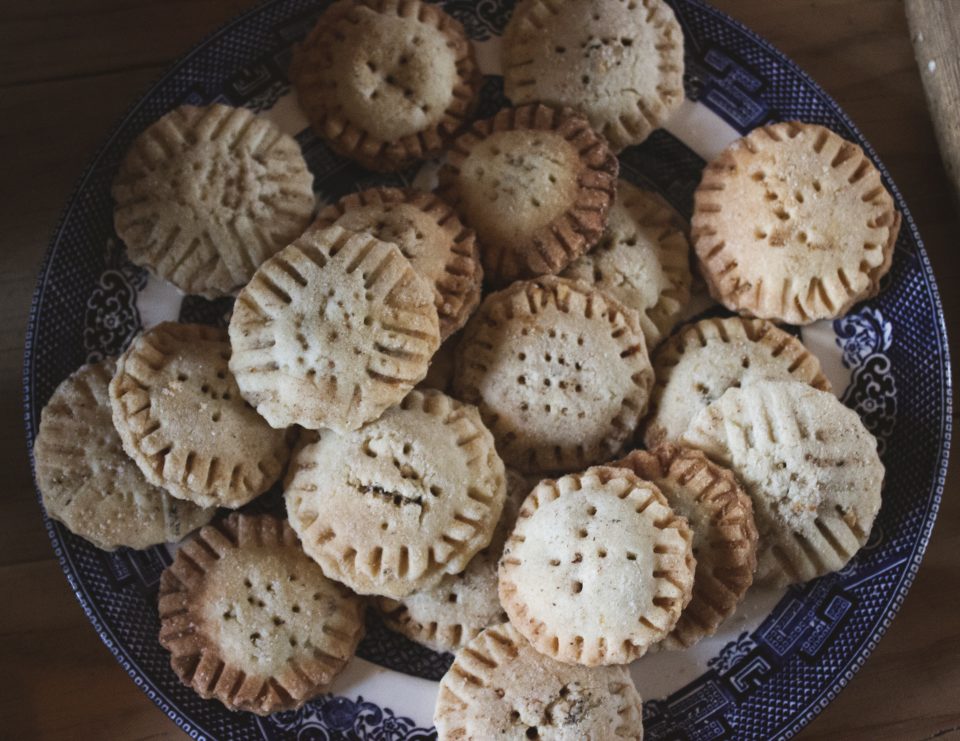 Recipe from The Tasha Tudor Cookbook, 1993

To ensure crispness, store the mince cookies in their own tin or crock. Use the basic Christmas Cookie dough receipt (see below) to make Mince-Pie Cookies. In addition, you will need:

Recipe from The Tasha Tudor Cookbook, 1993

In the Bixby House, guests can see preparations for the Cratchit family’s dinner, and meet the Ghost of Christmas Present, from Charles Dickens’ A Christmas Carol. 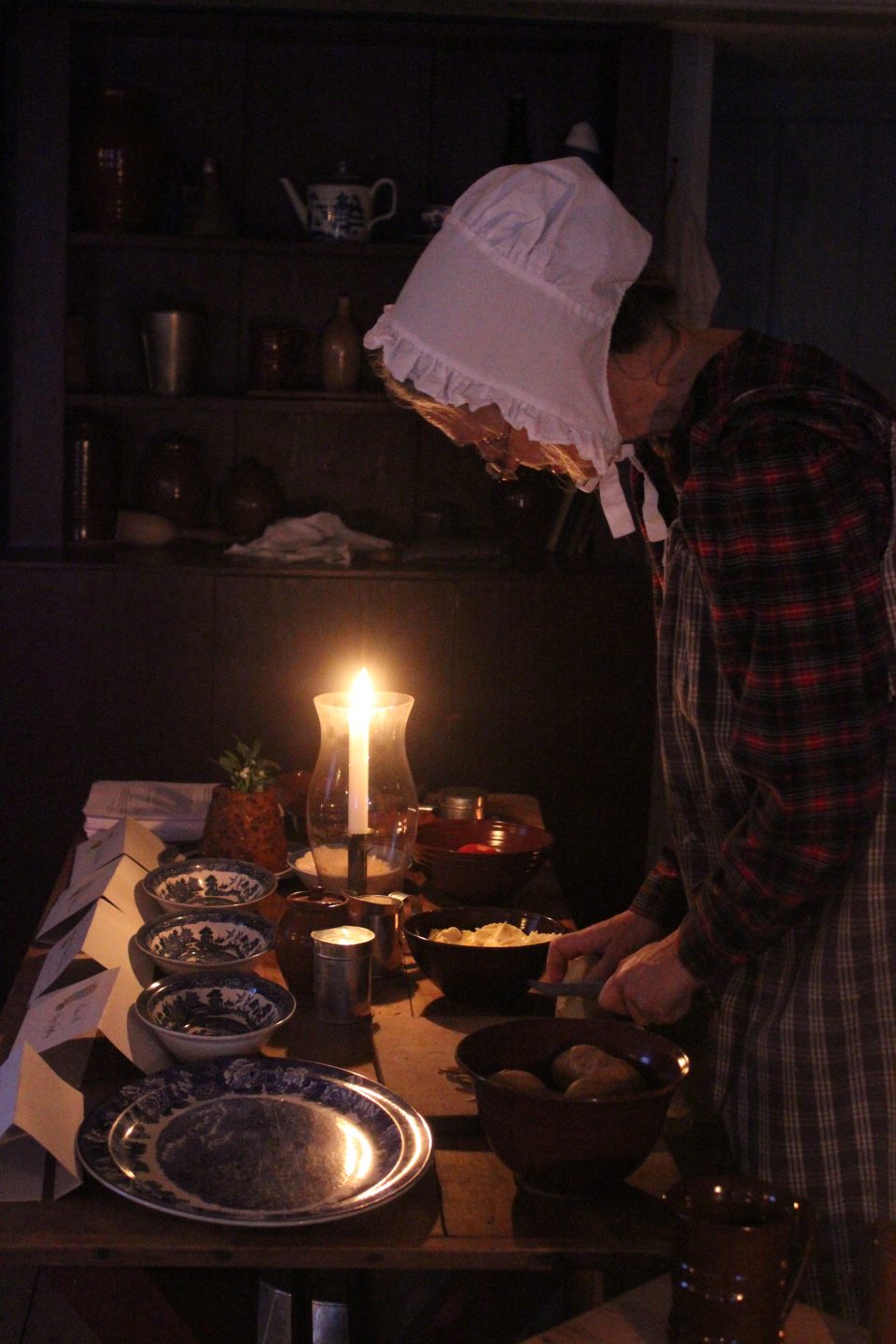 “There never was such a goose. Bob said he didn’t believe there ever was such a goose cooked. Its tenderness and flavor, size and cheapness, were the themes of universal admiration. Eked out by applesauce and mashed potatoes, it was a sufficient dinner for the whole family; indeed, as Mrs. Cratchit said with great delight (surveying one small atom of a bone upon the dish), they hadn’t ate it all at last! Yet everyone had had enough, and the youngest Cratchits in particular, were steeped in sage and onion to the eyebrows! But now, the plates being changed by Miss Belinda, Mrs. Cratchit left the room alone- too nervous to bear witnesses- to take the pudding up, and bring it in.”

See the original receipts being used during Christmas by Candlelight below!

To roast a Goose

“HAVING drawn and singed the goose, wipe out the inside with a cloth, and sprinkle in some pepper and salt. Make a stuffing of four good sized onions minced fine, and half their quantity of green sage leaves minced also, a large tea-cupful of grated bread-crumbs, a piece of butter the size of a walnut, and the beaten yolks of two eggs, with a little pepper and salt. Mix the whole together, and incorporate them well. Put the stuffing into the goose, and press it in hard; but do not entirely fill up the cavity, as the mixture will swell in cooking. Tie the goose securely round with a greased or wetted string; and paper the breast to prevent it from scorching. Fasten the goose on the spit at both ends. The fire must be brisk and well kept up. It will require from two hours to two and a half to roast. Baste it at first with a little salt and water, and then with its own gravy. Take off the paper when the goose is about half done, and dredge it with a little flour towards the last. Having parboiled the liver and heart, chop them and put them into the gravy, which must be skimmed well and thickened with a little browned flour.

Send apple-sauce to table with the goose; also mashed potatoes.”

“Take as many boiling apples as you chuse, peel them, and take out all the cores; put them in a sauce-pan with a little water, a few cloves, and a blade of mace; simmer them till quite soft. Then strain off all the water, and beat them up with a little brown sugar and butter.”

“Boil the potatoes, peel them, and break them to paste; then to two pounds of them, add a quarter of a pint of milk, a little salt, and two ounces of butter, and stir it all well over the fire. Either serve them in this manner; or place them on the dish in a form, and then brown the top with a salamander: or in scallops.”

No 33.  Sage and Onion, or Goose stuffing Sauce

“Chop very fine an ounce of  onion  and half an ounce of  green sage leaves;  put them into a stewpan with four spoonfuls of  water;  simmer gently for ten minutes; then put in a tea spoonful of  pepper  and  salt,  and one ounce of fine  bread crumbs;  mix well together; then pour to it a  gill  of  melted butter,  (or  broth,  or  gravy, ) stir well together, and simmer it a few minutes longer.”

“As Christmas comes but once a year, a rich plum pudding may be permitted for the feast, though it is not healthy food; and children should be helped very sparingly.  The following is a good receipt-

Beat the eggs and spices well together; mix the milk with them by degrees, then the rest of the ingredients; dip a fine, close linen cloth into boiling water, and place it in a hair sieve;  flour it a little, then pour in the batter and tie it up close; put it into a pot containing six quarts of boiling water;  keep a tea kettle of boiling water and fill up your pot as it wastes;  be sure to keep it boiling at least six hours- seven would not injure it. This pudding should be mixed an hour or two before it is put on to boil; it makes it taste richer.”

Music is also a hallmark of Christmas by Candlelight! Many of today’s “traditional” carols hail from the 19th century originally. Listen to a sampling of 19th-century Christmas tunes, played by OSV musicians, on our YouTube here. 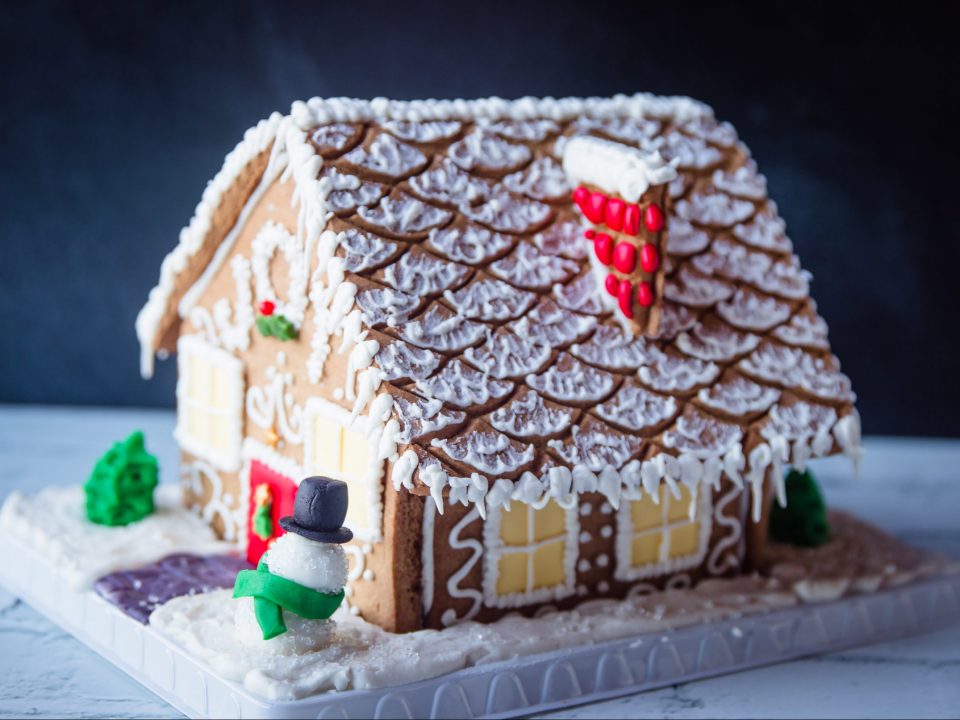 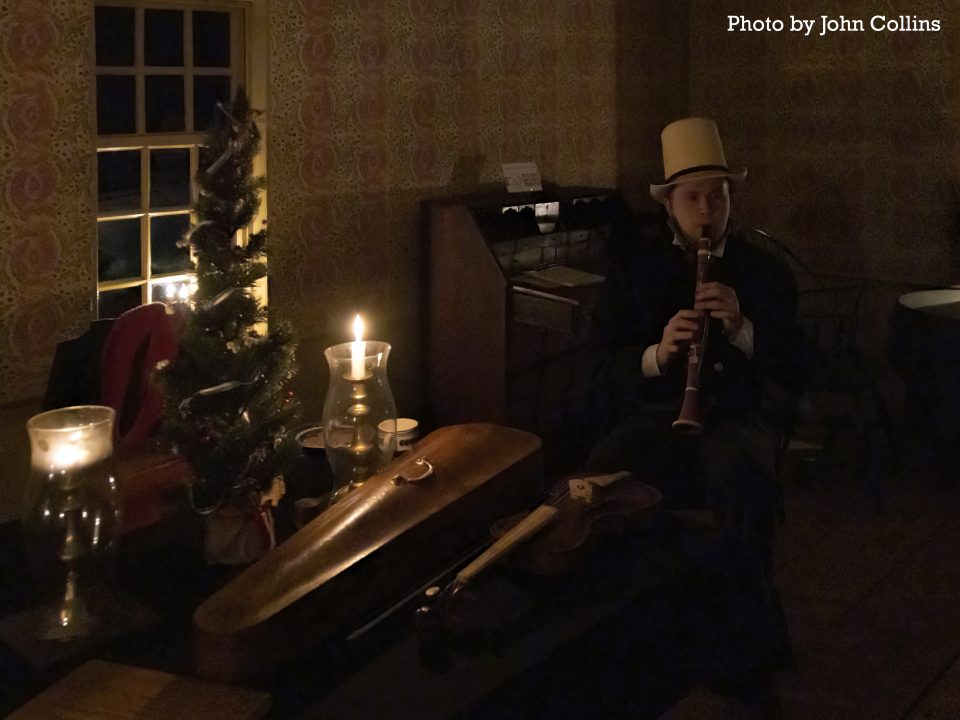 A Sampling of 19th-century Christmas Music 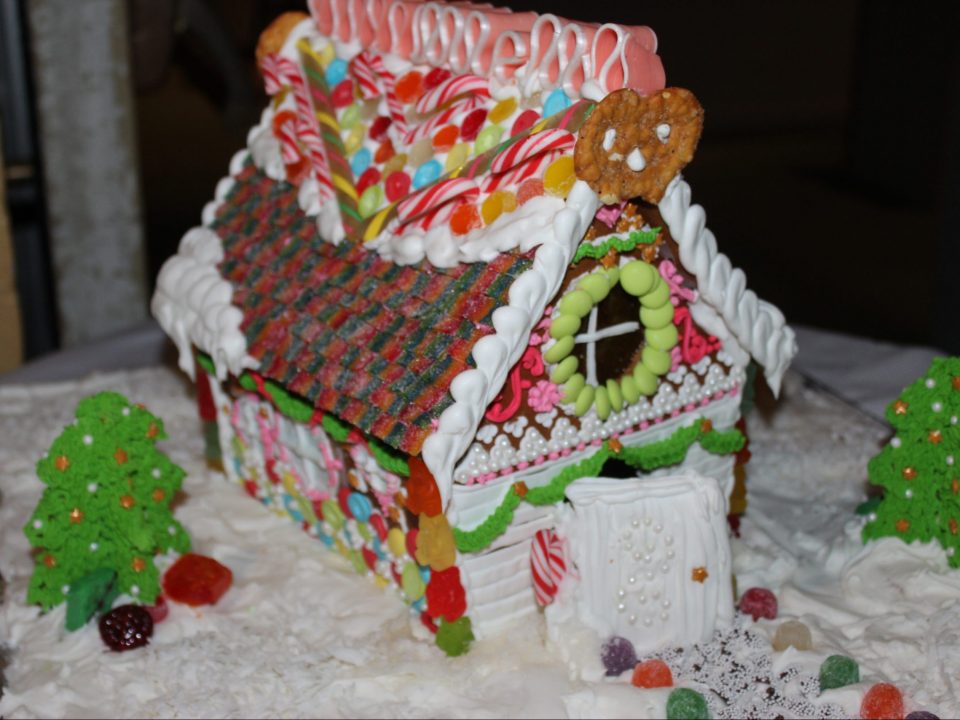 2021 Virtual Gingerbread House Contest and Vote for Your Favorite!