Experience the triumphs, trials and textures of everyday life in the 1830s – a period driven by agriculture, industry, family and the seasons. Find relevance from their stories, put your hands on history, and be inspired!

People – especially our trained costumed historians – are what make Old Sturbridge Village a truly special, interactive museum experience. Learn more about just a few of the people you might see in the Village during your visit.

Historian and Curator of Mechanical Arts

Having been employed at Old Sturbridge Village for more than 30 years, Tom Kelleher is one of the Village’s longest-serving employees. He currently holds the position of Historian and Curator of Mechanical Arts, and in his tenure at the Village, he has seen many developments at the living history museum. Today, he works both behind the scenes and out in the Village in costume.

Tom was hired at the time the sawmill was constructed, when able-bodied men were needed to complete this complex structure. An arduous project required skilled engineering and had several false starts along the way, but resulted in a magnificent structure that tells the story of timber production in early New England. With the newly-minted sawmill, the Village then had the ability to create the materials for another structure: the Small House. Tom and then-historian Ed Hood wanted to recreate a typical small dwelling from the period of the 1830s; since most of them had not survived, there was nothing representative at the Village of what the average family might have lived in at the time. After an archeological excavation at a site near Old Sturbridge Village and research on historical records—some of which were located in Washington, DC—work was begun on the Small House in 2003. The Small House opened in the spring of 2007 and has since been an engaging site where visitors experience first-hand what life was like for ordinary citizens of early New England. 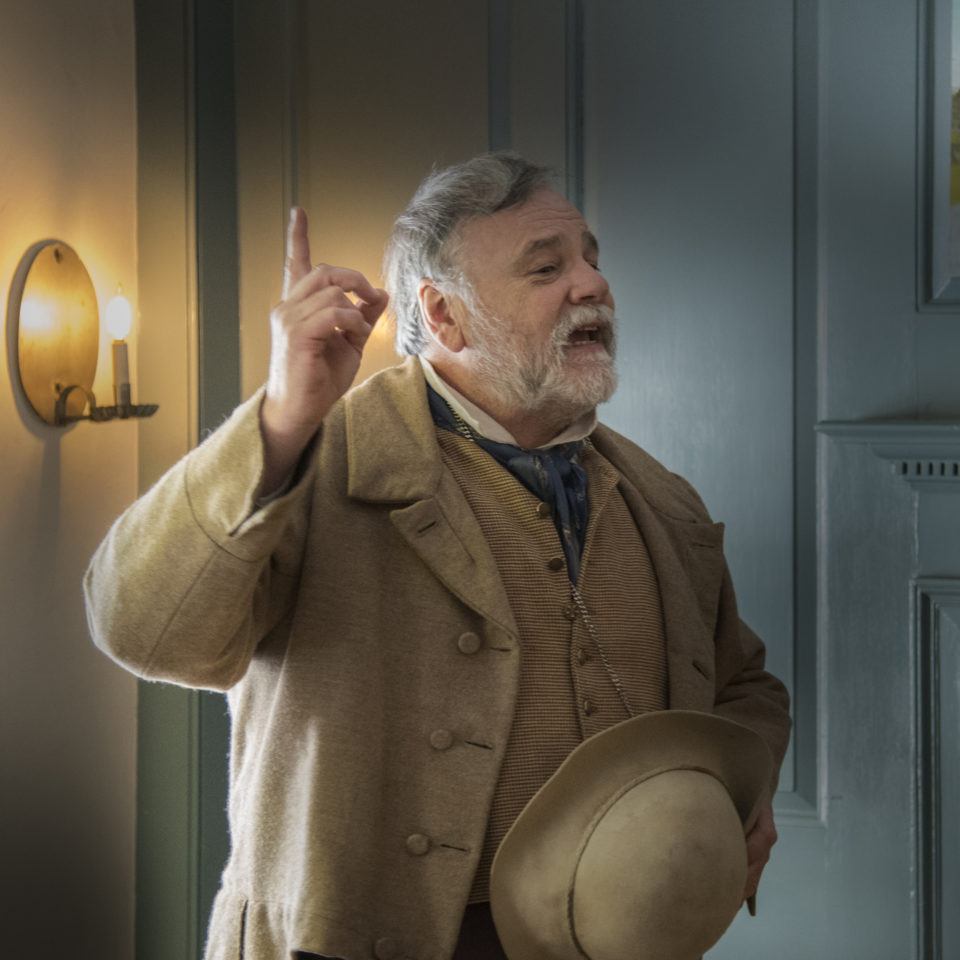 Coordinator of Households and Domestic Crafts

Since Jean Contino is so knowledgeable about 19th-century traditions, it surprises many to learn that her career at Old Sturbridge Village began in the accounting office, not in interpretation. It was in 1984 when Contino responded to a newspaper advertisement for a staff accountant and was hired, but she was entranced by what she described as “the magical place” that is Old Sturbridge Village. Thus she requested a transfer to the interpretation department and has loved it there ever since.

Contino hopes that visitors come away from their experience at the Village empowered to apply the lessons they learn at home. Whether it be creating a period meal after a “Dinner in a Country Village” experience, or making a historic recipe, she encourages visitors to try their hands at what they see during a museum experience. What she says is so unique about Old Sturbridge Village is the idea that history is not just about dates, major conflicts, and famous people, but about the everyday lives of people who actually lived in New England. 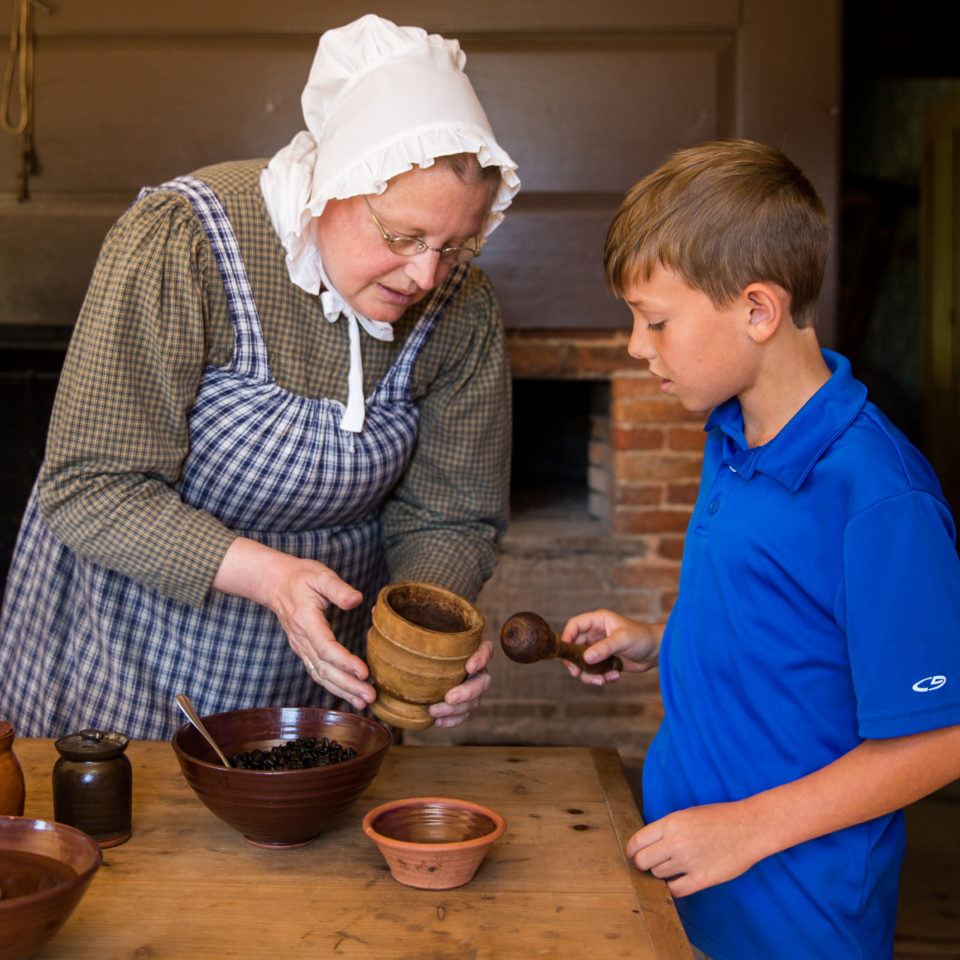 For Tin Production Lead Manager Phil Eckert, working at Old Sturbridge Village has been a family affair; not only did he meet his second wife here, but his daughter also worked at the Village when she was growing up. Phil has worked in a variety of roles, including firearms, the bank, and law office.

After receiving his bachelor’s degree in Communication Arts and Broadcast Theater at the University of Dayton, Ohio, he began managing theaters in the Sturbridge area. However, once he visited Old Sturbridge Village, he fell in love with the concept of presenting living history to the public.

It was an early childhood experience, however, that gave Phil the “living history bug.” When he was a young teenager, he had the opportunity to visit a living history museum in Ohio, where an interpreter held up an authentic rifle that was used during the Civil War. As the interpreter told the story of the general to whom the rifle belonged, a wide-eyed Phil was wrapped in attention. Then, to Phil’s surprise, the interpreter turned to him and said, “Would you like to hold the rifle?” That opportunity to “taste and feel the past” in such a visceral way was what got him hooked, and it is his hope that interpreters at the Village can continue to give new generations of children and youth that same kind of formative experience. 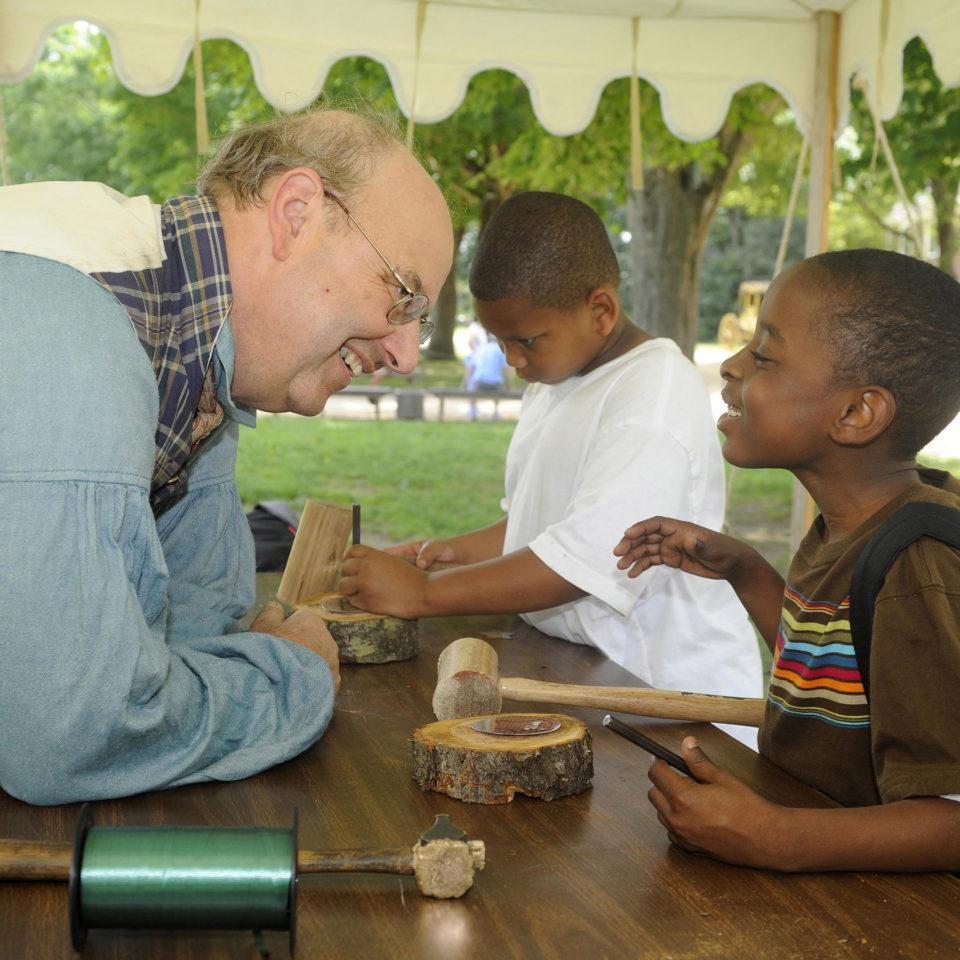 When Rhys Simmons was in college studying to earn a teaching degree, there were no internships available at Old Sturbridge Village, so he began his career at the museum in 2005 as a seasonal employee, tasked with leading games for children. It was not long though before he became a year-round, full-time worker, now leading the museum’s interpretive programs.

“I’ve never felt that there was a limit to what we can do,” he says, “and we’re always willing to try new things to introduce new generations of families to the Village.” He cites newly reimagined events such as “Dig-In: A Field-to-Table Festival” and “Craft: Beers + Trades” as well as enhancements of the wildly popular “Christmas by Candlelight” program as examples. 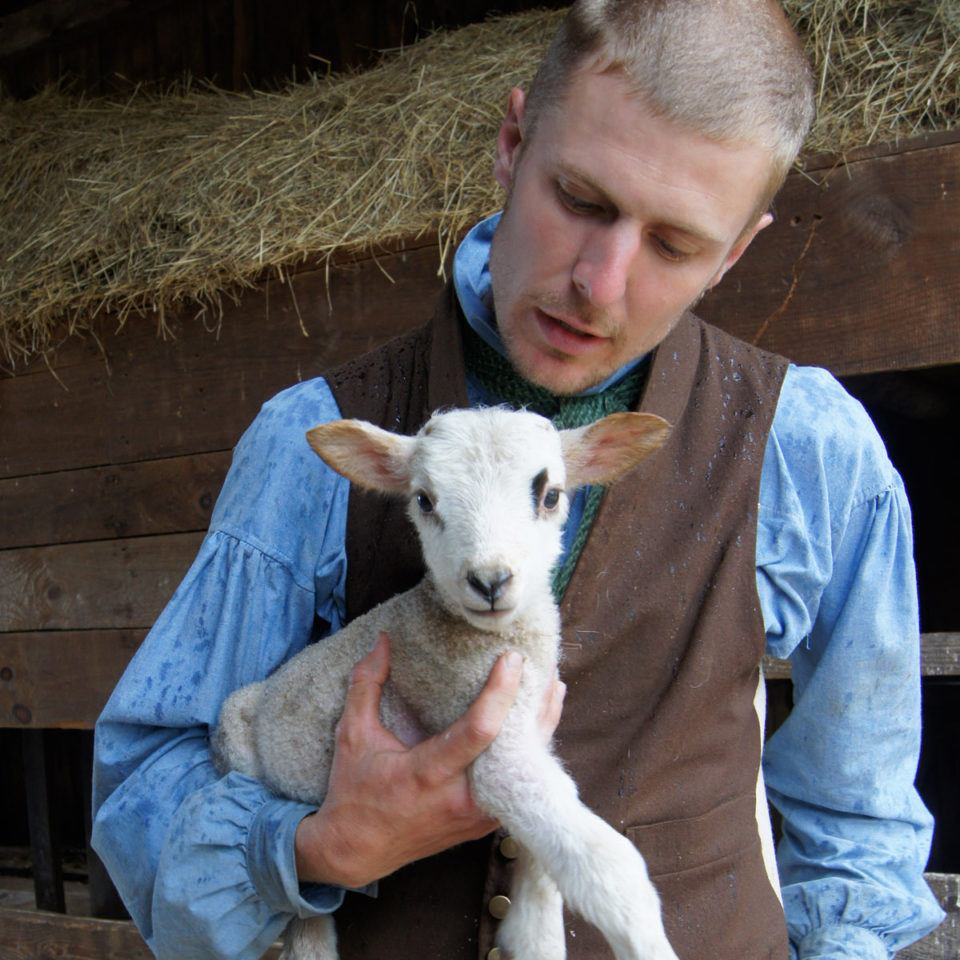 For Derek Heidemann, crafting and blacksmithing are a way of life. He began his career at Old Sturbridge Village with a Junior Internship while in high school. He has become an expert blacksmith, having practiced that trade since 2001, and he operates his own blacksmith business. He also later earned a B.A. and Master’s in History from Clark University.

It is Heidemann’s wish that trades take center stage at the Village, and he envisions a future where the museum becomes a sought-after destination for people to view and learn the crafting skills that are fast disappearing. As Heidemann said, “We want to be able to do more than just talk about what we’re doing, but also give instruction and inspire people to learn these crafts for themselves.” 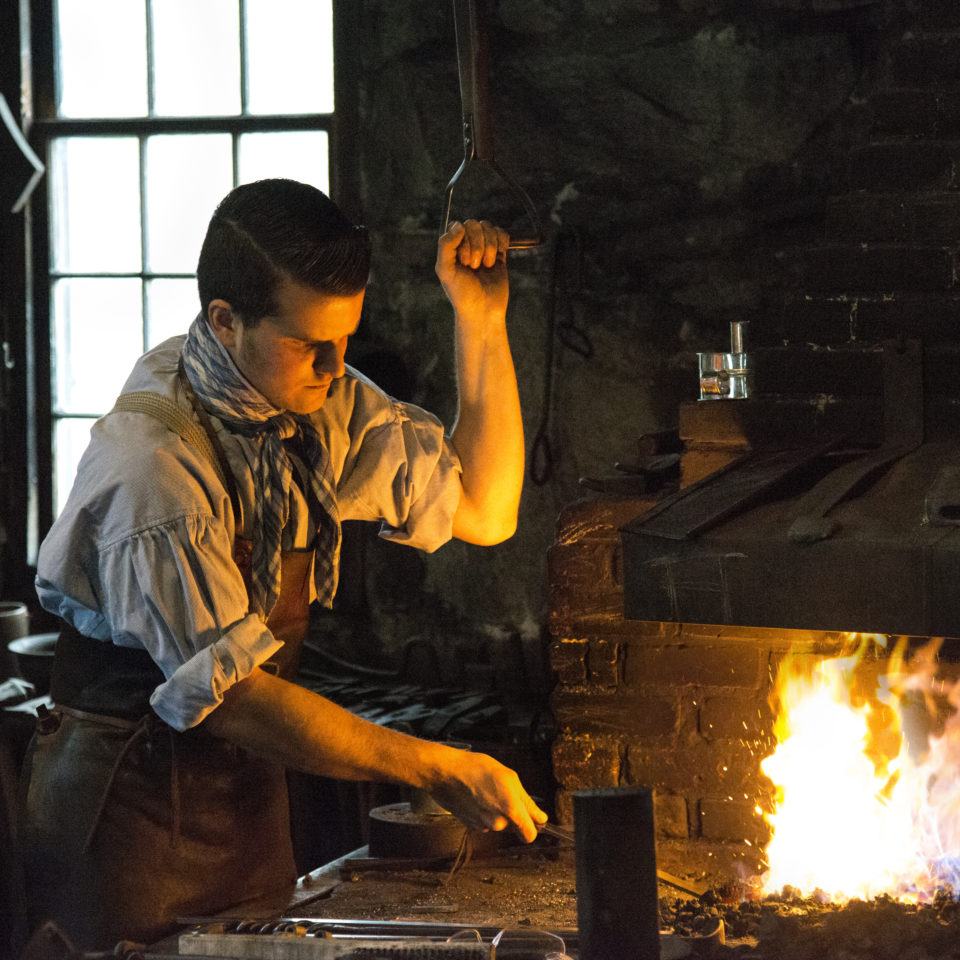 Emily Dunnack began her career at the Village just a few years ago, but she has had an abiding love for it since she grew up just over the border in Connecticut, and has been visiting since she was a child. In fact, her childhood memories of the Village as a “magical place” is what inspired her to make educating visitors through living history programs her life’s mission.

It is Dunnack’s hope that every visitor comes away from their experience at Old Sturbridge Village not only with a renewed sense of the past, but also inspired to implement an idea at home, such as beekeeping, building a community garden, making a pie, or expressing their views about a social issue. 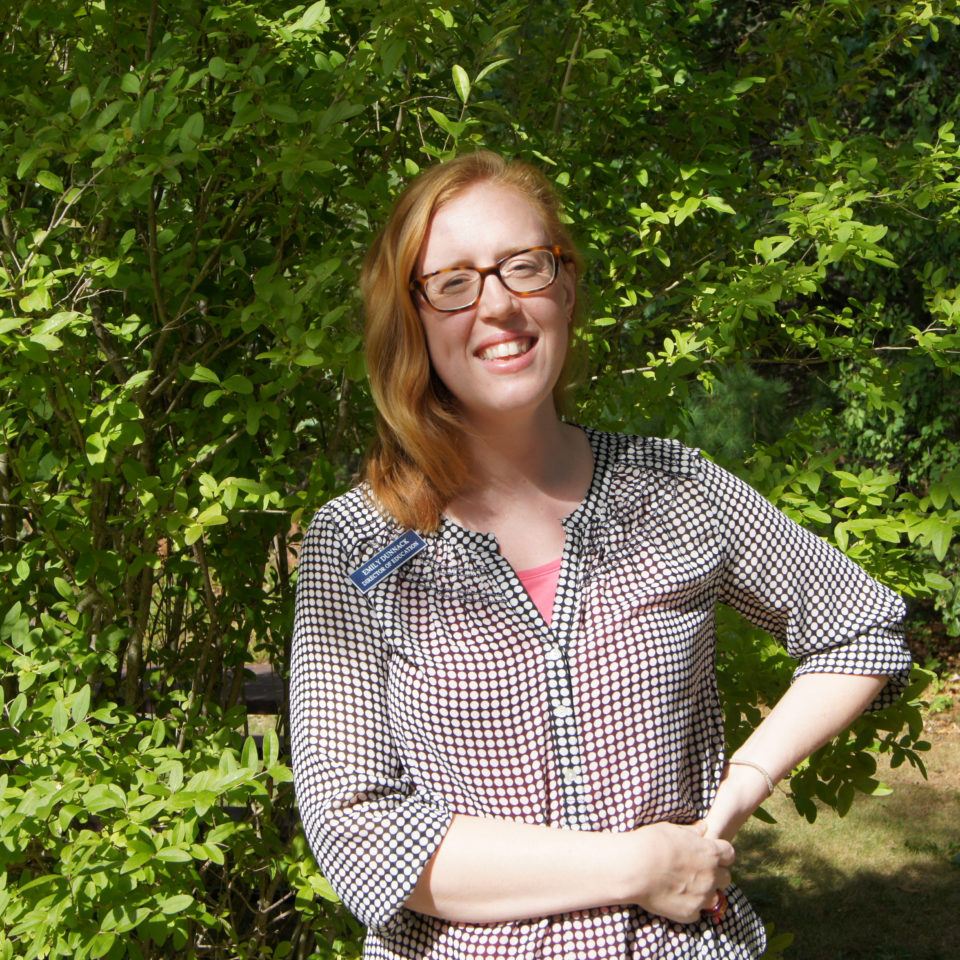 With so many individuals working and volunteering for the Village throughout the year, there just isn’t space to represent everyone. Stay tuned for updates and additions to this page as we celebrate the people of Old Sturbridge Village.