The Cabinetmaking Shop is NOW OPEN! 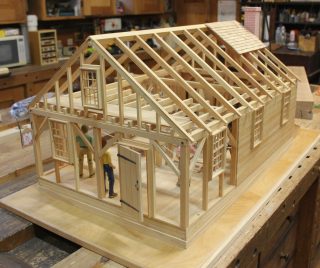 Sturbridge and the surrounding region were home to some of the foremost rural cabinetmakers of the early 19th century, including Nathan Lumbard and Oliver Wight. These craftspeople, as well as others like them, were integral parts of the story of rural communities. The Village is currently constructing a new Cabinetmaking Shop on the Village Common, and we are looking forward to opening the shop and bringing the stories of the region’s early 19th-century cabinetmakers to Old Sturbridge Village in the fall of 2021.

The Village is using both historic and modern building methods in the construction of the Shop, which is patterned after period structures operated by early 19th-century New England craftsmen. The building will include a wood-burning stove, as did many free-standing shops of the period, and a small external woodshed.

Many elements of the final Cabinetmaking Shop will be created by craftsmen and interpretive staff working in the Village, including reproduction period tools, doors, shelves, and the box stove. The large timbers for the construction of the shop were even cut by the Village Sawmill.

Old Sturbridge Village is grateful to The Americana Foundation and Robert E. Roemer for their generous support of the Cabinetmaking Shop.

The grand opening of the Cabinetmaking Shop occurred on October 9, 2021, as a part of Woodworking weekend. 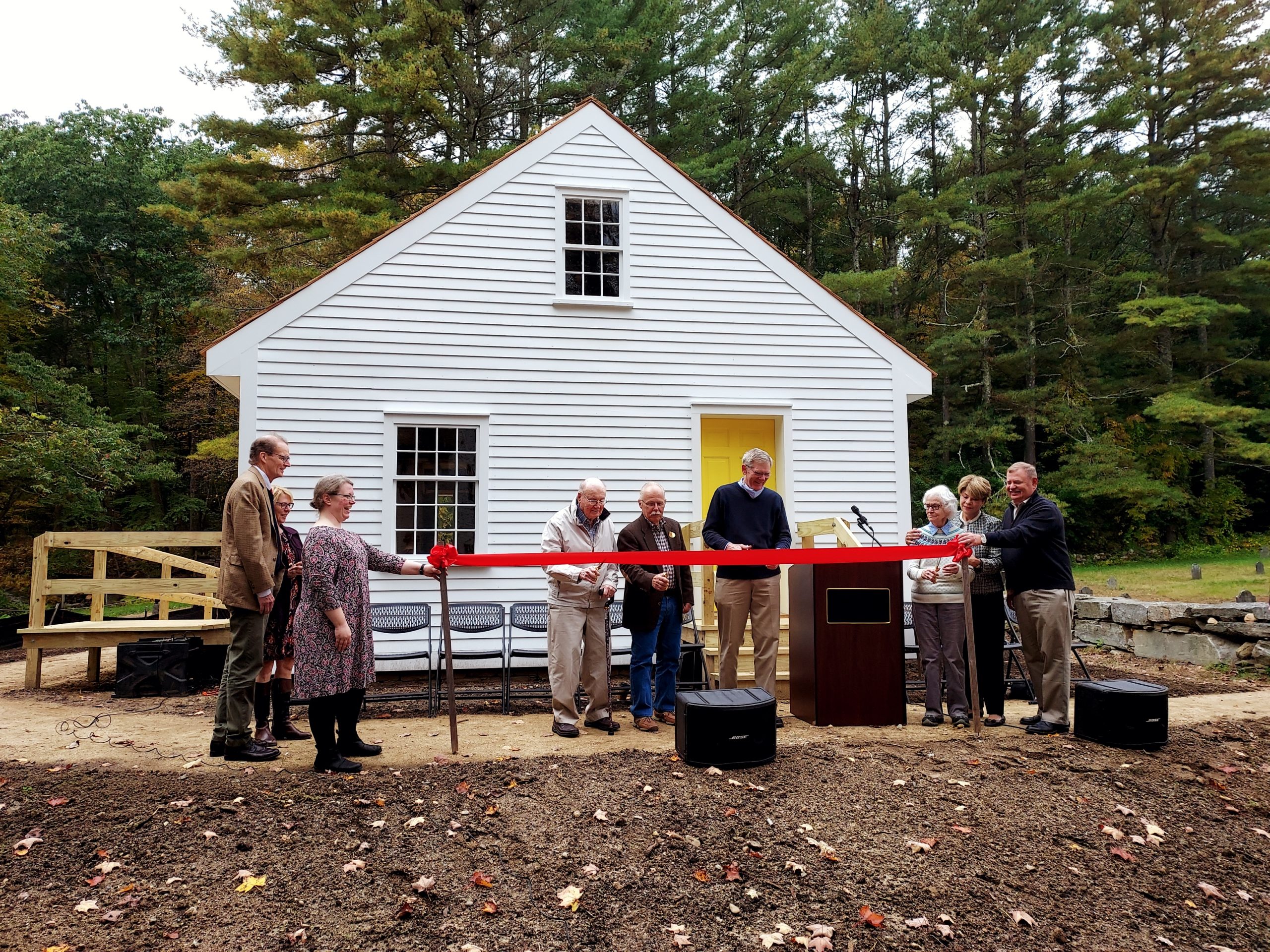 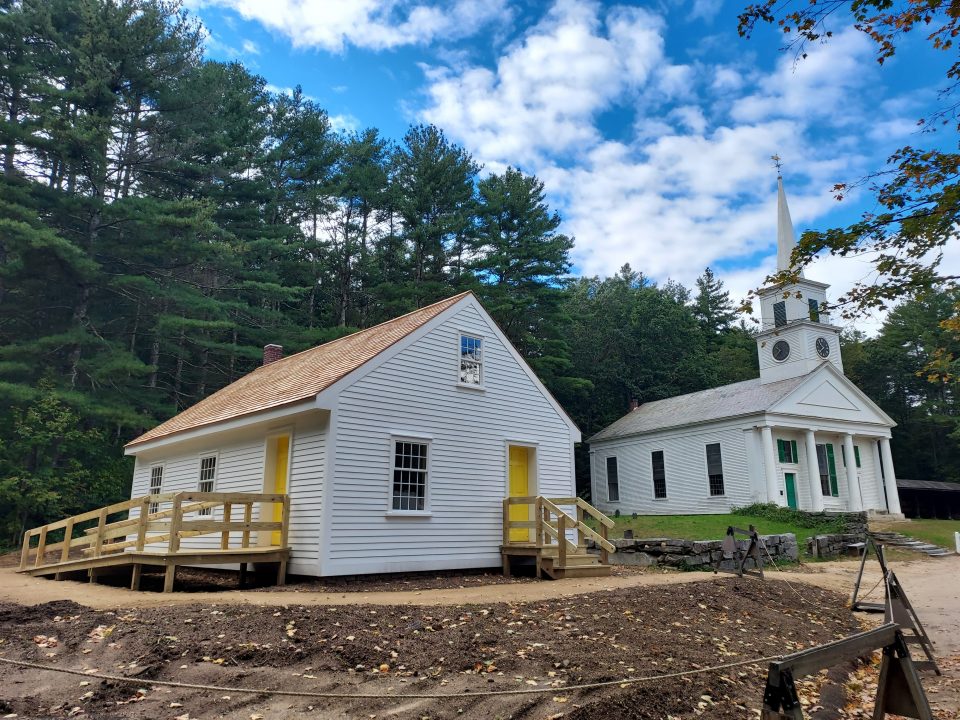 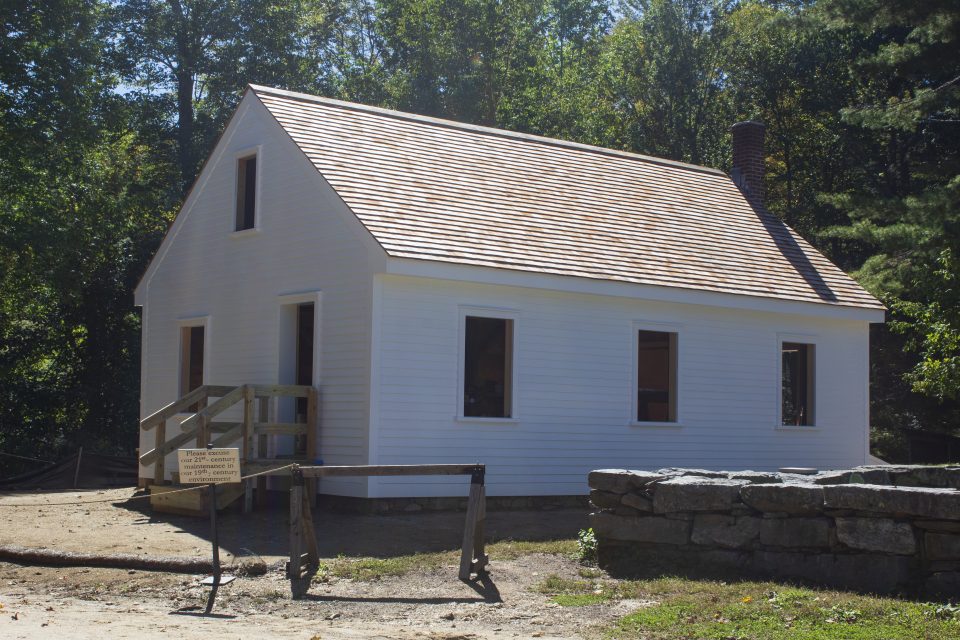 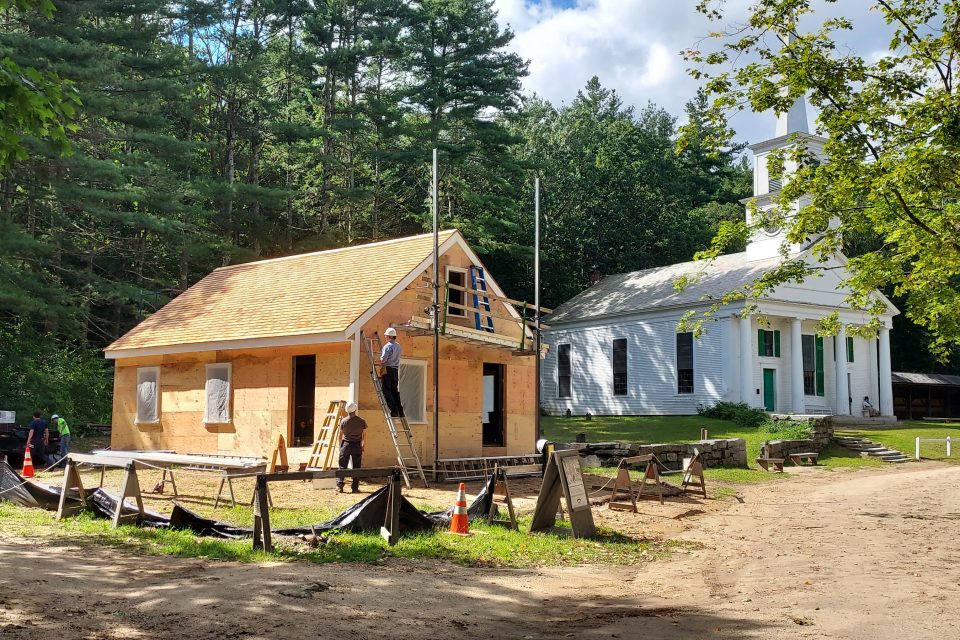 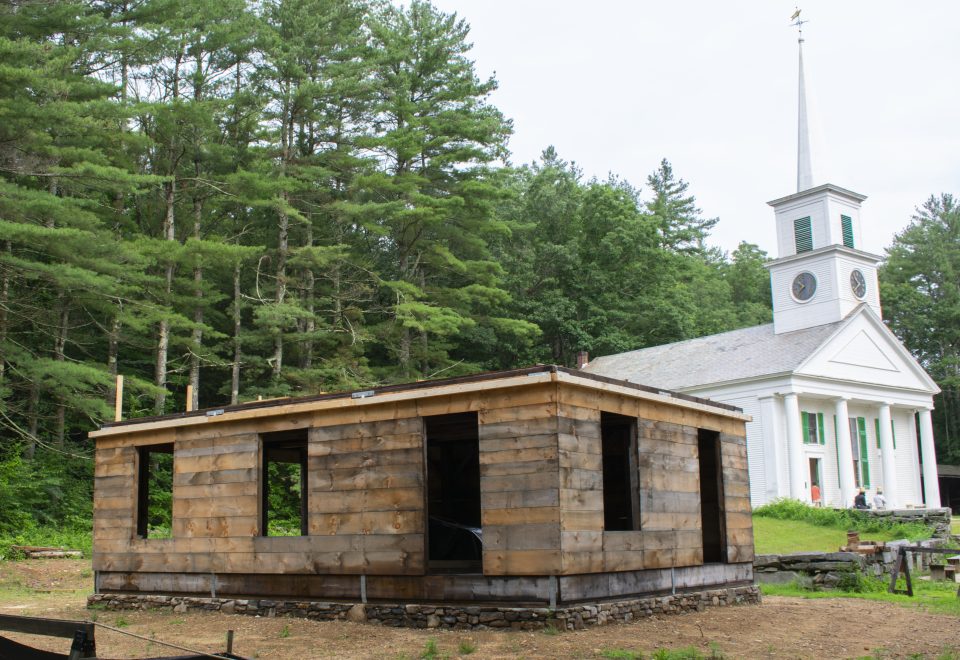 Woodworking Demonstrations on the Common | July 2021

Our master cabinetmaker has already started working in costume! While the shop building is still a work in progress, he has been working on creating farm tools, kitchen utensils, basket handles, and other small but needed woodworking projects on the Village Common. 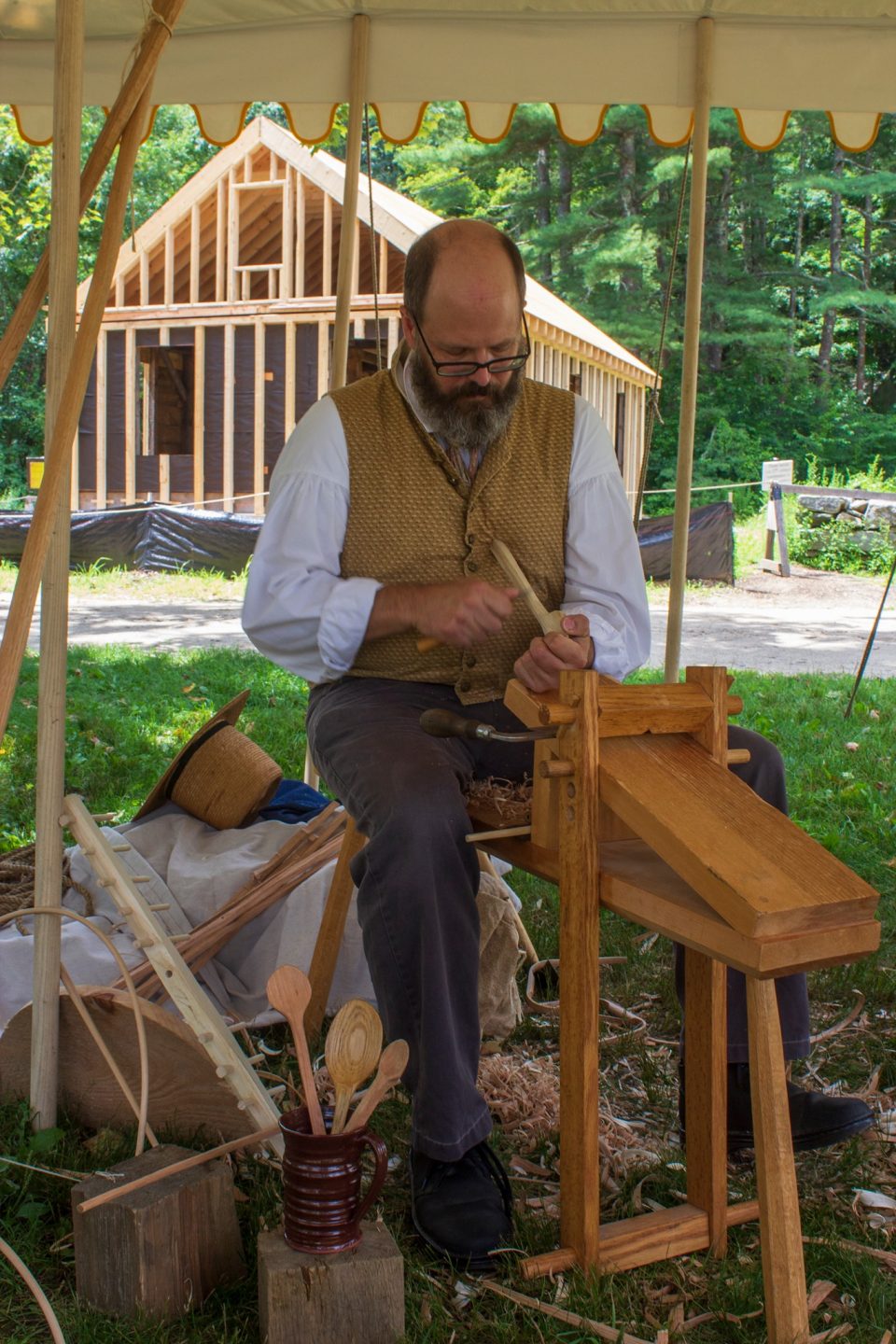 In early 19th-century New England, it was tradition to name the frame of new buildings and christen the structure with rum. In the spirit of early 19th-century frame raising naming ceremonies, Village staff involved in the raising wrote and recited the following poem and broke a bottle of 1985 OSV Orchard White apple wine. Since 1985 was the year that the old Cabinetmaking Shop on Gallery Row at the Village closed, we thought it fitting to christen the new shop’s frame with this apple wine.

Mr. Hooker!
Here is a frame
It deserves a name!
‘Twas sawn from pines, hemlocks and oaks
With many of our sawmill’s strokes
Joints cut with chisel and mallet;
I ask you – what shall we call it?

Gentlemen – and dear ladies fair –
Who saw this rise into the air
We have a frame
That has no name
Its lines are true; its joints all fit.
Yes Sargent, What shall we call it?

Long ago back in eighty-five,
Before most of you were ev’n alive,
The bosses back then though it best
To give the trade a little rest.

“We need more research!” they all said,
“Before you craft another bed!”
Decades passed as attendance dropped.
Our plans to bring the trade back stopped.

Trustee Bob Roemer pushed the plan
He is indeed quite a wise man.
He built the sash and made the stove
Ever forward the scheme he drove.

Brock Jobe too moved the plan along
And told us to make it square and strong.
Mortise and tenon, stud and brace,
We cut and chopped at steady pace.

Brad and Rich, and also Lee and Mike.
Installed the sills and joists with spikes.
Many a man has lent a hand
To raise these walls that proudly stand.

Despite pandemic, heat and drought
Our will to build it did win out.
Some joists came from Kurt Parliament,
And boards were bought from Larry Flint,
To build a shop for Jad’n and Chris.
But we’ll conclude before you hiss!

This shop’s a hybrid, that is true
And stubborn men have seen it through.
So what’s more fitting for its name
Than to proclaim it the MULE FRAME?!

Watch a time-lapse of the frame raising below.

During the Village’s open hours, costumed historians worked on preparing the large timbers for the frame of the shop. Shown here is one interpreter using a saw, firmer chisel, slick, and auger to create mortises and tenons. 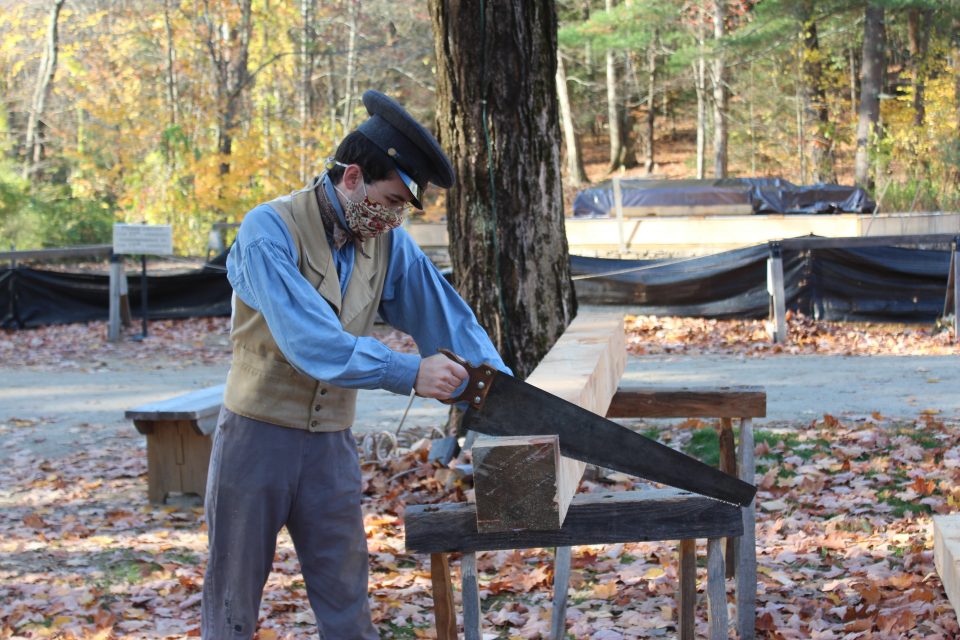 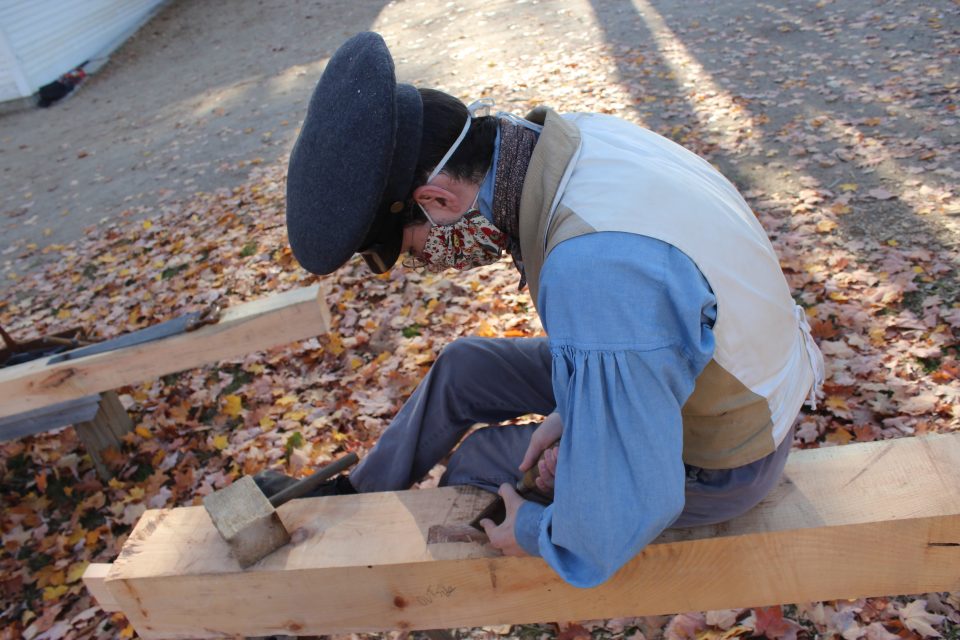 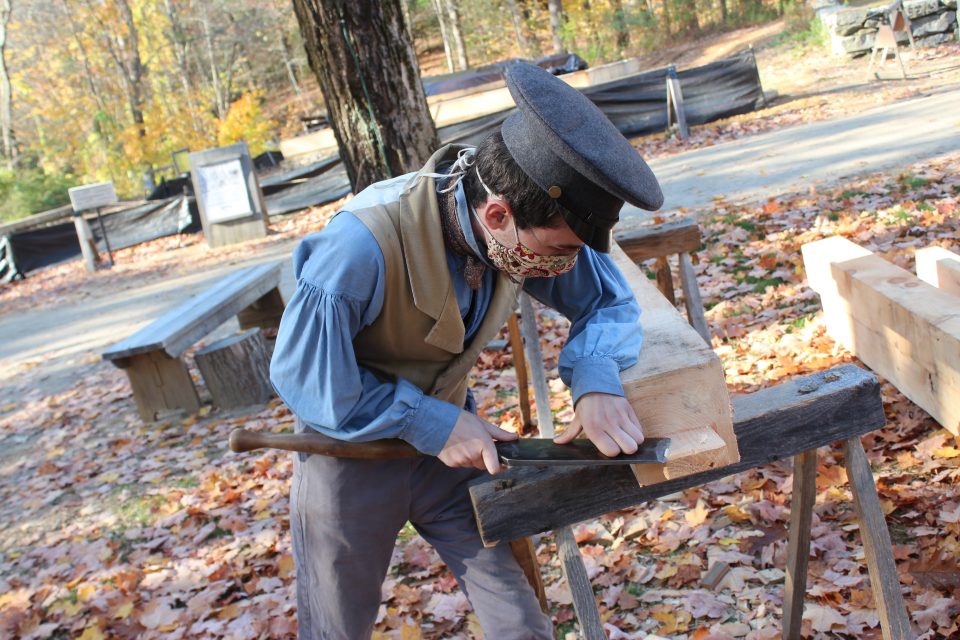 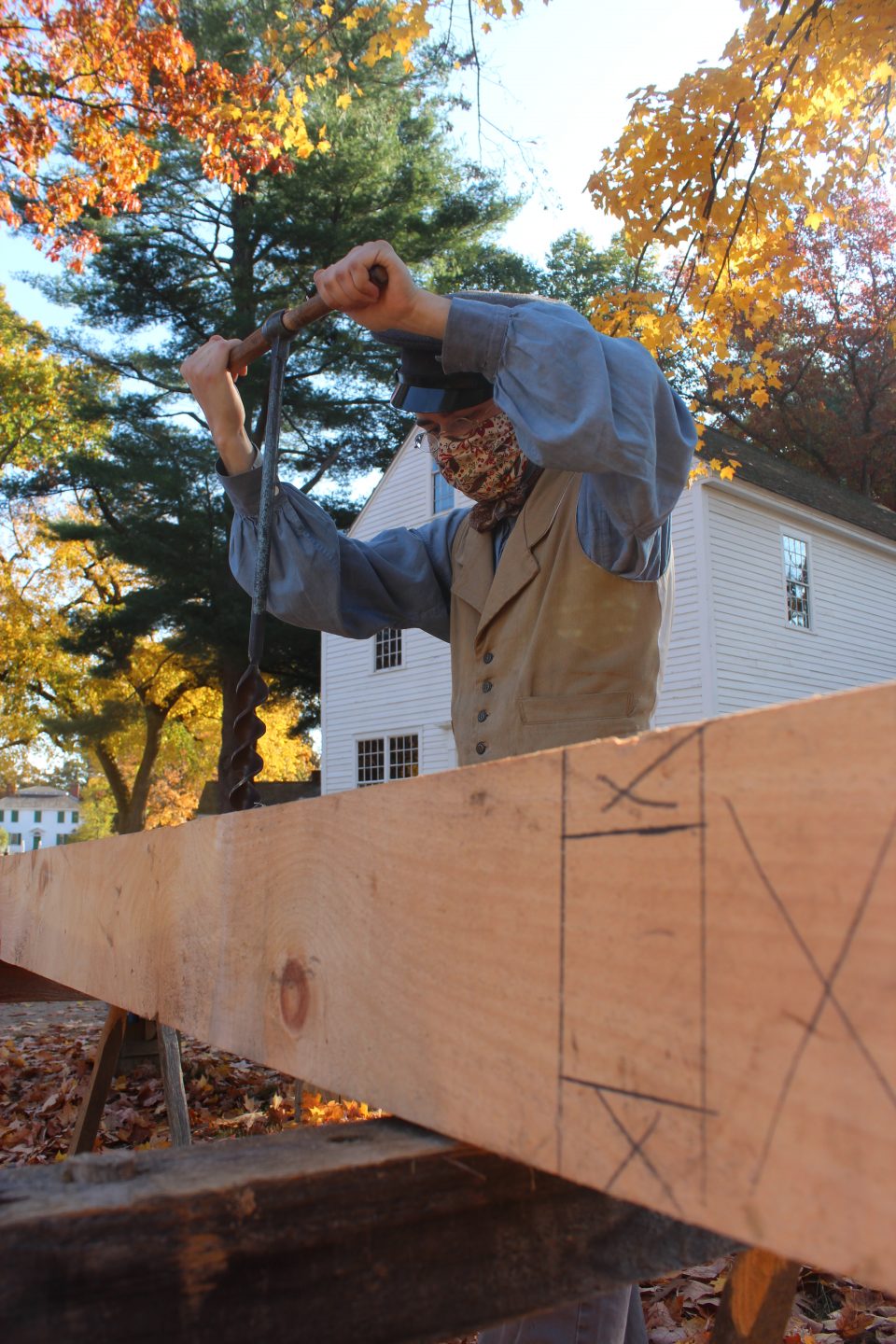 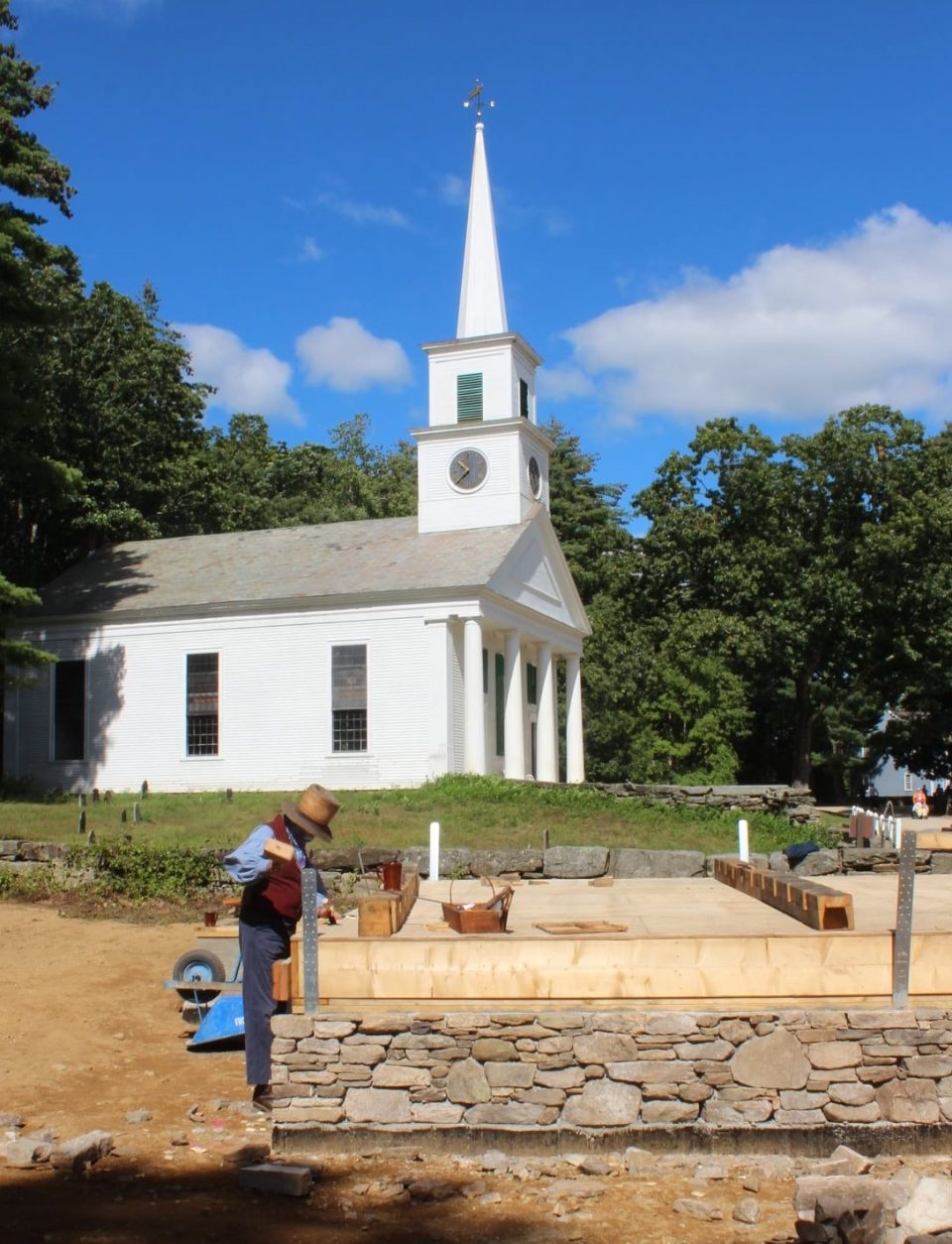 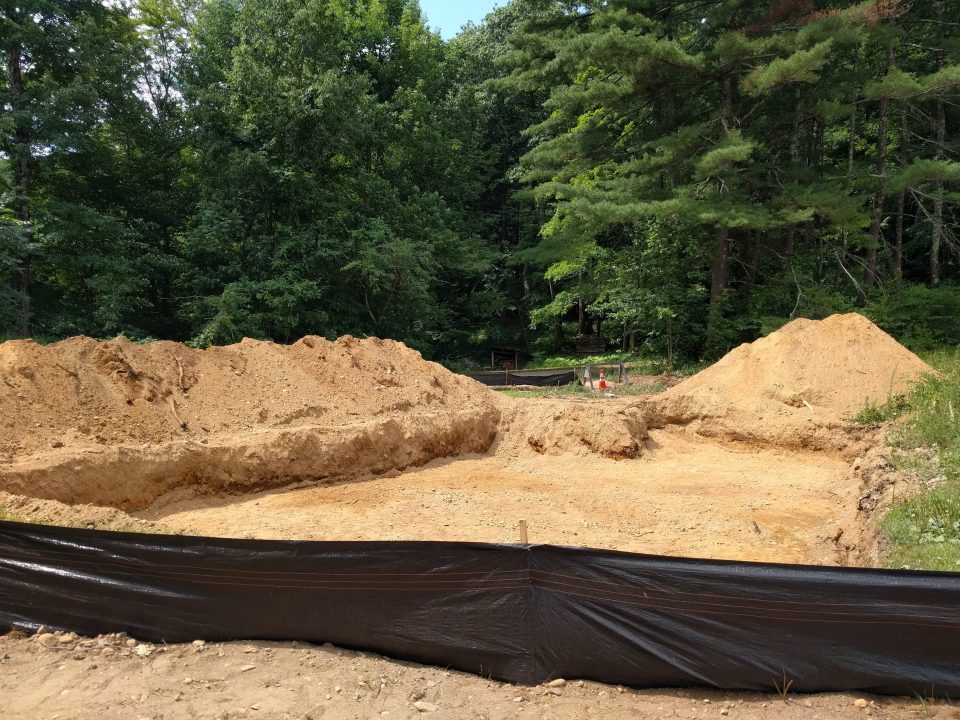 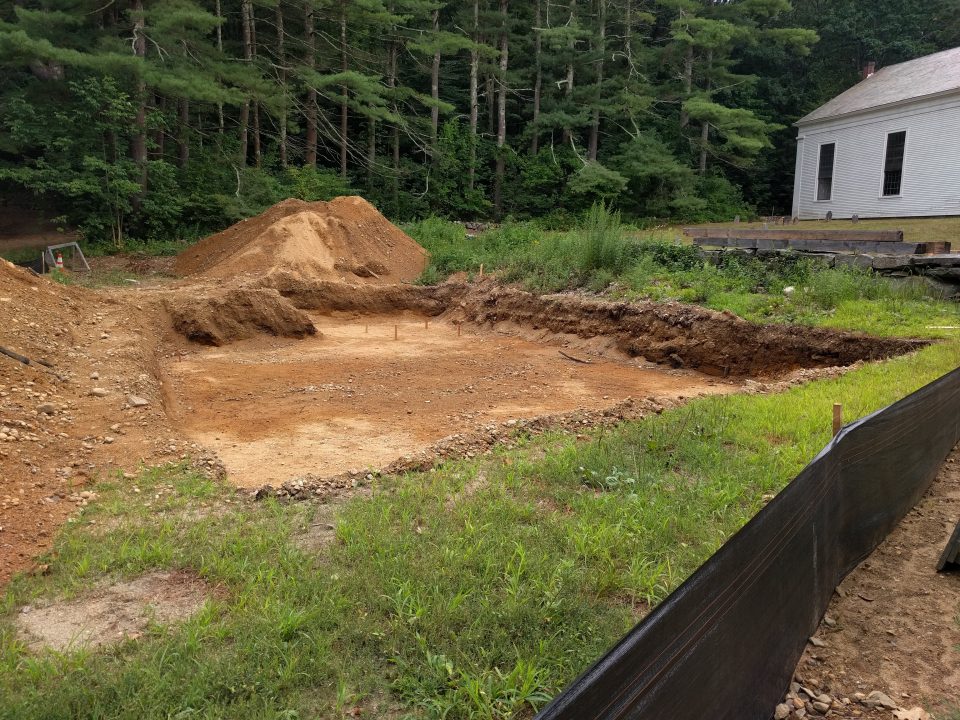 A temporary Cabinetmaking Shop opened in the former Hands-On Craft Center on Gallery Row in May 2018. It featured demonstrations on select days as well as a variety of historical artifacts. 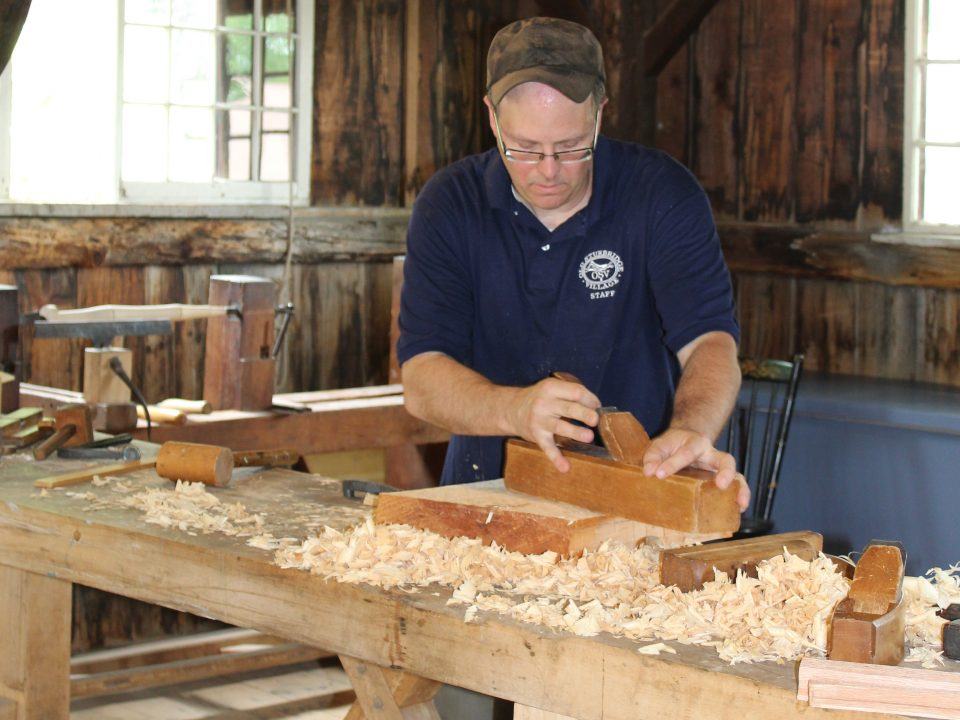 Below is a picture of a scale model of the shop, built by Old Sturbridge Village Trustee Bob Roemer. 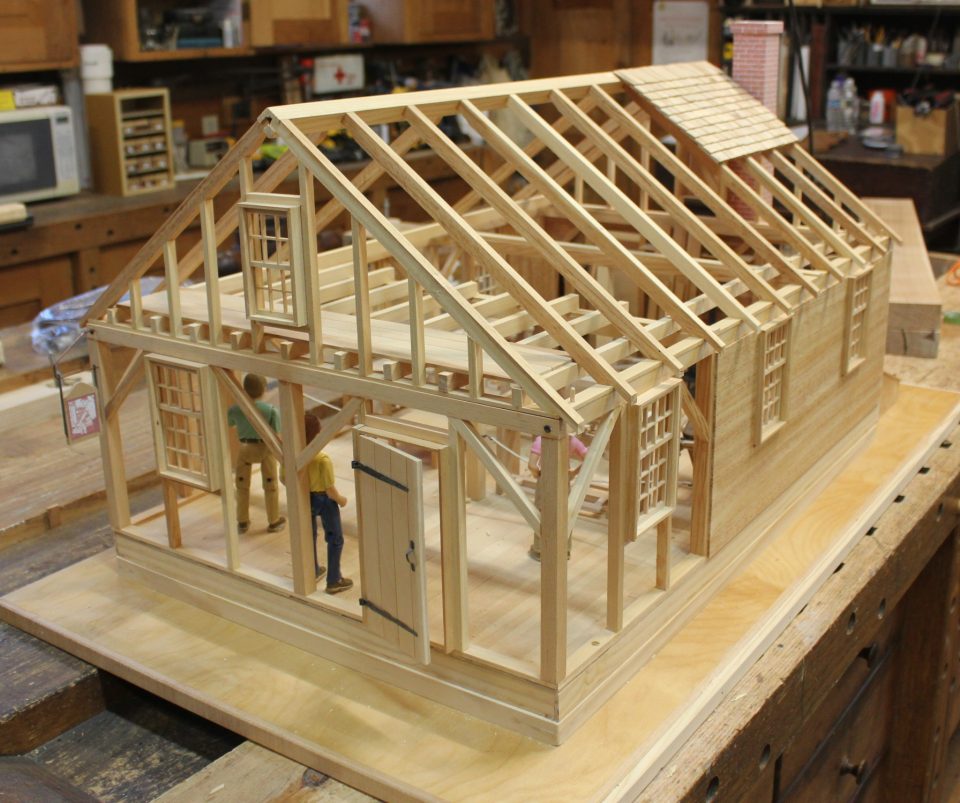 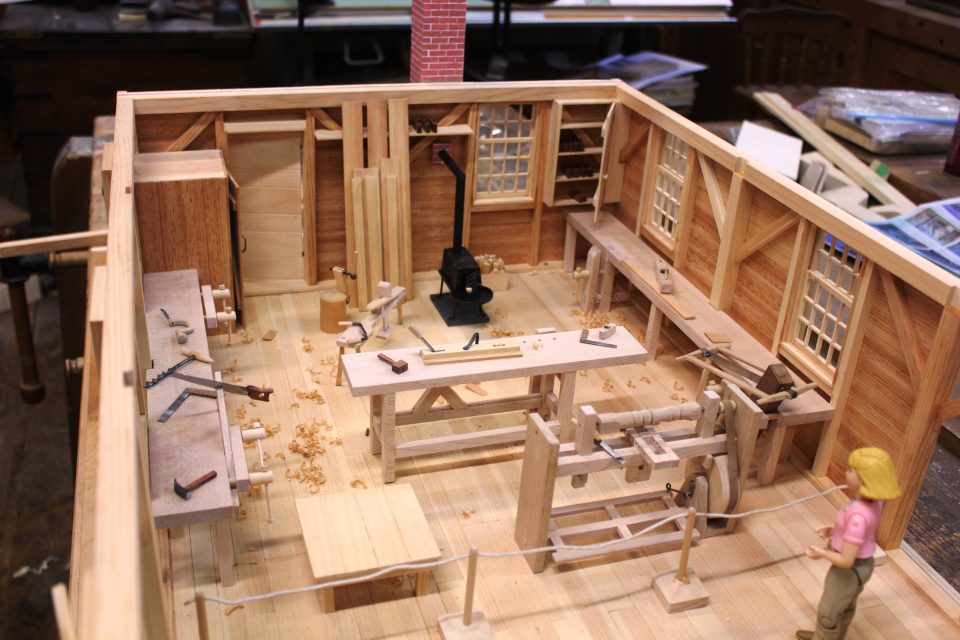 A Long History of Cabinetmaking at the Village

For approximately 40 years, Old Sturbridge Village operated a craft shop dedicated to woodworking techniques. The Cabinet Shop ceased operation in the mid-1980s, and the building was repurposed for broom making and other craft demonstrations.

The Cabinetmaking trade is so vital to the story of early 19th-century rural New England life, so Village staff and Trustees began working on a plan to bring cabinetmaking back to the Village permanently around 2017. 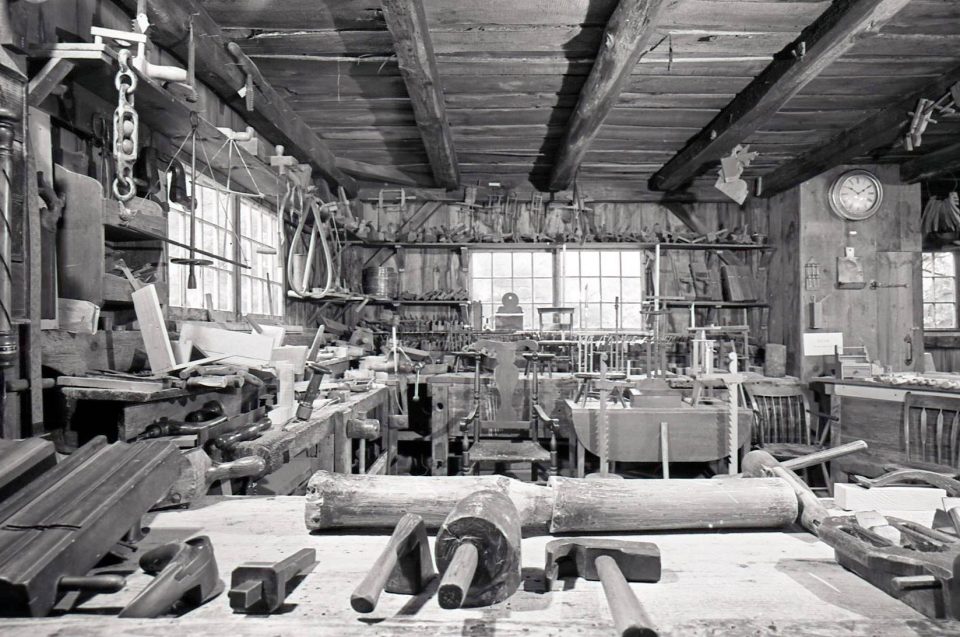