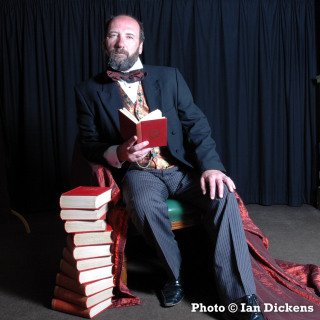 This September, join us for special performances by Gerald Dickens, the great-great-grandson of famous author Charles Dickens! The Oliver Wight Café will also be open to serve pastries, cookies, coffee, tea, beer, and wine till 6:00 pm.

Pre-registration is required; see below for more information.

Each performance will include both shows that are listed below with a 20-30 minute intermission.

Charles Dickens is well known for his ghost stories but The Signalman is the most atmospheric of them in all.  In a deep, damp railway a lonely signalman tells his terrible tale to a complete stranger.  The signal box, the tunnel, even the telegraph wires seem to haunt him at every turn.  Gerald Dickens’s performance reflects the brooding nature of this work.

A Child’s Journey with Dickens

The story, written by Kate Douglas Smith Wiggins and told by Mr. Dickens, is about a 12 year old girl’s memory of her chance meeting with her literary hero, Charles Dickens, on a train journey from Portland Maine to Boston Massachusetts, and his enchantment with both her boldness and innocence.  An enchanting tale for all ages!

Meet & Greet:
At the end of each performance, there will be a meet and greet event in the Ox & Yoke Mercantile.  Gerald loves to talk to people, take pictures and sign autographs.

This show will run at 1:00 and 6:00 on Friday, September 16th. Please click your prefered time slot below to reserve your ticket(s). Seating is general admission and doors open 30 minutes prior to showtime.

Gerald Dickens is a great great grandson of the author Charles Dickens.  He has worked as an actor, director and producer for many years.

In 1993 he created his first one-man show, a theatrical performance of A Christmas Carol inspired by Charles’ own energetic readings of the 1860s.

A fascination with the life and works of his subject led him to write and direct further one-man shows including Mr. Dickens is Coming!, Nicholas Nickleby, and Sketches by Boz.He regularly performs in major theatres and arts centers as well as at hotels and stately homes.  He has appeared at several arts and literary festivals in the UK and has been entertaining cruise ship passengers worldwide since 2007.

In 2012, as part of the Charles Dickens bicentennial celebrations, Gerald met the Queen of England during a special reception at Buckingham Palace

Gerald enjoys introducing the works of Charles Dickens to children and young adults, and has taken workshops and performances into schools, colleges and universities both in the UK and the USA.

He has recorded his one-man dramatization of A Christmas Carol and it has been regularly broadcast on radio.  His television work has included various appearances on features and documentaries for BBC, ITV and Channel 4.  Gerald is now in the process of recording unabridged versions of the complete works of Gerald Dickens, the first four of which are already available to download.

From Connecticut to Maine, from Baltimore to London, Jennifer brings over twenty years of museum and performing experience to her creative work. Her love of literature, history and acting began age the age of seven when her mother placed a copy of Dickens’s A Christmas Carol in her hands. Her passion for maritime history, domestic history, medical history, dairy production, textiles, and First-Person Interpretation culminated in The Petticoat Pages, a one-woman company specializing in customized performances ranging from the 17th-19th Centuries.

Jennifer holds a BA in Theatre Arts, Speech & Film from Keene State College, and an MFA in Creative Writing from Fairfield University. She lives and works in Salem with her own company, but also as Special Projects Coordinator for Intramersive Media, LLC, and as an actor/writer/director for History Alive, Inc, and this season as a Museum Interpreter for The House of the Seven Gables.

Old Sturbridge Village is a museum long dear to her heart. She is delighted to perform alongside Gerald Dickens in A Child’s Journey with Dickens.

In 1842, Charles Dickens and his wife Catherine or Kate, came to the United States for the first time, providing Dickens opportunities to explore the nation’s growing cities, experience the culture and lifestyle of the young nation, interact with fellow authors, and examine innovations seen in science and industry.  His trip started in Boston.

Dickens was impressed by what he saw in Boston, Worcester, Lowell, and other Massachusetts communities. He marveled at the Perkins Institution and Massachusetts Asylum for the Blind, the House of Industry, Boston’s prison, Harvard University, and the mills of Lowell. Dickens also had a phrenological exam performed by Worcester’s L. N. Fowler during his visit. Dickens met numerous writers and community leaders while in Massachusetts and traveled to the state’s largest cities. Dickens also traveled through Connecticut and Rhode Island as he journeyed south to New York. The young Dickens was already considered a celebrity, an international superstar of literature, and attracted huge crowds wherever he went.